Women and the earth, all that is female, we the creators of life, have been under assault by patriarchal societies for over five thousand years. That assault is nearing its end as men’s efforts to control women and the earth and appropriate our creations have succeeded all too well, bringing climate chaos and escalating the extinctions of Life. There is only so much one species can take from the earth without ecological overshoot and economic collapse.

There is only one way forward – a return to female-centered societies. We are told that matriarchies never existed and it is (probably) true that there has never been a society where women dominated men. But, who said female power or matriarchy is about control and exploitation? (Men?)

A new patriarchal force has emerged over the past half century from an unlikely quarter – the transgender movement. Who would have thought that a group of people so unhappy with the constrictions of gender would exchange one gender trap for another and decide that the only way out is to change their bodies through extreme measures including hormones and (sometimes) surgery? The Women’s Liberation Movement has made clear arguments for decades that gender -masculinity and femininity – constricts behavior and should be abolished so that everyone can be “free to be, you and me.”

But, gender is not just constricting – it is deadly! When boys are socialized into masculinity they are trained to become dominators – aggressive, unable to recognize or express many emotions, independent instead of interdependent. When girls are socialized into femininity they are trained to become submissive – passive, agreeable, nice, unable to look out for their own interests. For many women and girls this training in submission – femininity – comes in large part from experiences of rape, incest, humiliation, sexual harassment and other forms of male violence. 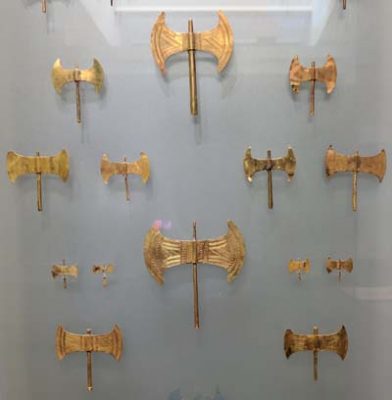 The labrys is a central symbol from many ancient matriarchal cultures, especially around the Mediterranean. The labryses pictured here are clearly made for ritual purposes since they are fashioned from gold. Beginning in the 1970s, lesbian feminists adopted the labrys as a symbol of resistance to patriarchy. Photo by Paula Mariedaughter, taken at the Heraklion Archeological Museum in Crete, Greece.

Gender is the institution that creates the aggressive men and “broken” women, the dominators and dominated, who will perpetuate patriarchal society. Instead of challenging this deadly system of gender, people who embrace transgender politics and understandings uphold masculinity and femininity as desirable roles (and risk their own health as they subject their bodies to dangerous medical interventions). Instead of fighting against patriarchy and its system of gender, transgender people are seeking personal solutions by changing their gender and, supposedly, their sex.

But other transgender people who hold extreme views, transactivist extremists attacking feminists (TEAFs), have responded to what they see as the threat of Women’s Liberation by threatening feminists’ livelihoods, protesting and closing down feminist conferences, festivals, workshops, and speakers and then calling feminists who critique the transgender movement a hate group. These TEAFs want to silence any debate about gender and so-called “gender identity.” Who would have thought that a group of people so unhappy with the constrictions of gender would attempt to destroy the one social movement, Women’s Liberation, that has a clear analysis of gender and that has been working to abolish that institution for fifty years?

Women and the earth are female and the sources of life. All our creations, all our children are sacred. Men become much needed allies to women and the earth when they refuse to “focus their energy on re-defining women in their own image” and instead claim “themselves to be gender non-conforming men, a no less sacred expression of humanity,” as Ruth Barrett wrote in Female Erasure (p. 481).

Everyone indoctrinated into the patriarchal society now over-running the earth learns to feel uncomfortable with and even hate our own bodies. We are too fat or too thin, too dark or too light, female-bodied or male-bodied when we wish we weren’t, too tall or too short, we have the wrong color eyes, we have disabilities, we are too old or too young, our breasts are too large or too small, and on and on. Even women labeled “beautiful” by society constantly worry about any little perceived flaw in their appearance. Some male scientists even want us to “transcend” these bodies altogether and upload our minds into machines.

Diversity in the Natural World

The natural world thrives on, requires diversity. All this self-hatred and body-hatred, including the self-hatred driving the transgender movement, stems from patriarchal society and the ways it has indoctrinated each of us. The only way out is self-acceptance and joining the fight to end patriarchy, including every form of domination.

We invite everyone, including all the people who are currently identifying as transgender, to join us in bringing patriarchy, including gender, to a quick end and in building female-centered societies.