lesbian – a woman
a woman not defined by man
or
by her relationship to man, any man
but by her
her love of woman

lesbian goes against the grain
strong, defiant, female
by birth
not by feminine description
or restriction

she is
a lesbian
being 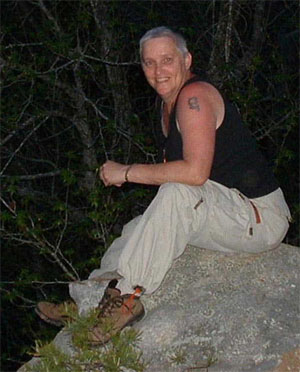 I am not gay, though I am queer (different from the norm), I am not unclear. I claim my birthright as a woman for there is nothing stronger or more powerful on this earth than a woman.

I claim lesbian, a womon-loving-woman. I give thanks every day that I was not born a man, needing a d**k to make me feel “bigger than, better than,” always aware of and needing to take care of my d**k. Creator was kind and I was born a woman.

Woman – the essence and the word is still vilified in this man-centric civilization. Every strength, intelligence, ability, sense of self, sense of power, demand for freedom and independence — we are conditioned to believe must be a “masculine” trait. No wonder that young dykes and “butches” feel they can not be women, can not identify as “woman.” Better to be “other” or anything but weak, useless women.

I am 60 years old and I am no boy, no matter how you spell it (boi), no insignificant, irresponsible, unthreatening child – no immature male child. Hell no! I am a woman. Fully grown and taking my own. I do not have to redefine or rename me because I do not fit their definition of woman. I am a woman, this is what woman is. Strong, capable, powerful and able – I am a woman. Tender, loving, alive – woman. Stand up in your face, take my full space, know its ALL my place – woman. I am a woman-loving-woman – I am lesbian.

Lesbian is not a queer, not a gay woman, not a “bisexual” not an “in transition” person. Lesbian is a woman who defies patriarchal definition and thinking. Lesbian loves women, including her woman self.

Feeling like there is a “place” for each of us is critical for our spirits to soar. Many of us fought hard for lesbian space, had to create it, are still fighting to maintain it. I am a lesbian and I want lesbian space, I want a lesbian conference. I want to share readings and writings with women who identify as lesbian.

I do not want to give up Womonwrites: A Southeastern LESBIAN Writer’s Conference (1) to males, to male energy, male thinking, male beings, to those who were born or raised male or who claim male privilege, to women whose experience or focus is male, to women who accept male definition.

Centuries of male dominance have not been able to erase women-loving-women, women identified women, lesbians, amazons.  I love seeing and hearing the younger women sharing with, growing with earlier feminists, lesbians, landykes, survivors and pioneers. Will those we welcome into our homes and our hearts succeed where the men have failed.

Perhaps if we do not surrender our identity as a Lesbian gathering, young women will not come and Womonwrites may eventually die. Better to die naturally than be murdered. When there are no longer any Womonwriters left that identify as lesbian, there will be no need for Womonwrites.

If some younger women feel that “lesbian” does not include them, perhaps they will start new gatherings that meet their needs and their sense of identity and community. But do not come to a LESBIAN gathering and try to erase the lesbian.

1. The Womonwrites conference recently split into two conferences. One, Dykewriters Southeast Lesbian Writers Conference, continues the Womonwrites tradition of womyn-born-womyn-only space. Dykewriters will have its first conference in December, 2019. Here is their description of Dykewriters: “Dykewriters create space for womyn-loving-womyn who are born female, still live as female, identify as lesbians, and love to write, read, and listen to lesbian words. We are primarily for lesbians in the southeastern region of the United States, but lesbians from other regions are welcome. We celebrate womyn, affirm our herstory as lesbians, and work together to find avenues of creativity and expansion.” For more information see the Dykewriters website.