No More Gay Pride for Fayetteville, AR! This whole fiasco, now called “Pride Events” disappears lesbians, promotes drinking establishments, multiple drag shows, and high-priced “social events” held at an expensive downtown hotel. Fayetteville is only playing “follow the leader” in the national trend to eliminate any reference to gay men and lesbians in the title. Who benefits from this? Not lesbians or gay men! 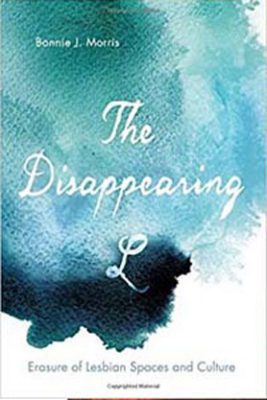 Lesbian Pride is quite Alive!

This is a tightly controlled series of events organized by a group called Northwest Arkansas Pride. Read the statement you will find below from their website. All these requirements are carefully sanctioned by the state, or in this case the City of Fayetteville. We who are trans-critical voices are to be excluded because our political assessment of the trans philosophy is deemed “offensive”!

This “offensive language” term is the code used to silence differing political opinions like mine. Reading this text written by the organizers assured me I would not be a welcome addition to their parade highlighting “diversity”. Diversity is another code word demanding the inclusion of male to trans persons in women only or lesbian only events. Diversity is not meant to include the opinions of Radical Feminists. Our opinions and beliefs are routinely labeled “offensive” and exclusionary. Any discussion, criticism or questioning is prohibited.

Double XX women claim our space! Click here to buy your own button.

The rainbow flag has been captured by the trans activists and their allies. The online promotion for the “Pride” event features photos that I find full of stereotyping of gay people and our interests. See https://pride.nwaequality.org/ Additionally, no where did I see the word “lesbian” mentioned at all!

We who are fiercely loyal to lesbians and to the long term interests of women and girls have been demonized both locally and nationally for our carefully thought out criticisms of the trans gender movement. The symbolism of removing Gay Pride and becoming Pride events parallels the stigma now attached to gay young people. Young women who do not fit the stereotype for girls and young men who do not fit the stereotype for boys are now the prime candidates for transitioning. This generation of youths are the innocent victims of a questionable social experiment which will leave many young people sterile and hormone/drug dependent for their entire lives. The medical and pharmaceutical industries will thrive. 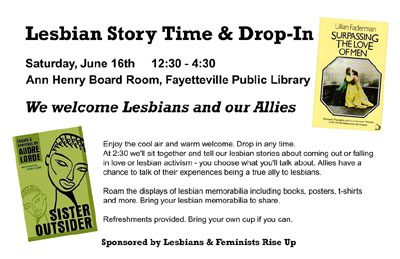 After we studied studied the carefully scripted language from Northwest Arkansas Pride, a local group of lesbians and feminists decided to create a lesbian-centered event in Fayetteville for the same day as the Pride, 2018 parade. We quickly made a flyer to advertise our Lesbian Story Time held at the Fayetteville Public Library on Saturday, June 16th from 12:30 to 4:30. We welcomed lesbians and allies.

Our stories were front and center at our successful Lesbian Story Time. We provided food and cold drinks on that hot, sunny day. We decorated the room with Lesbian books, posters, tee shirts and memorabilia including my Missouri license plate from 1984 that says LABRYS. Every woman there got to tell part of her story—we laughed and sang and supported each other as strong women. And we are planning more events!