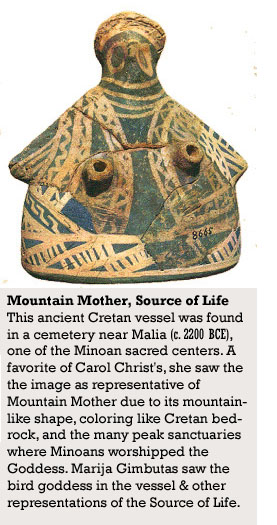 What do a bunch of feminist women do while riding a tour bus around the Mediterranean island of Crete? If they are on the Goddess Pilgrimage started by Carol Christ over 20 years ago, they sing songs honoring the Goddess. The song that drew me most from the first time I heard it on the fall 2022 Goddess Pilgrimage was “Mountain Mother.” Not surprising since the rocky, sparsely vegetated, yet hauntingly beautiful mountains of Crete surrounded us much of the time as our trusty bus wound its way up and down and around the island. The Pilgrimage leaders regularly pointed out double mountain peaks, suggestive of women’s breasts and therefore sacred to the ancient matriarchal peoples of Crete.

We were traveling to experience various sites sacred to the ancient Minoan culture, a matriarchal civilization that thrived on Crete from 3000 BCE to 1450 BCE when Mycenaeans from the Greek mainland invaded. We trekked through the stone ruins of large sacred centers such as Knossos and Phaistos (called “palaces” by patriarchally-inclined archaeologists) and climbed up to mountain peaks and caves that were once ritual sites of the Minoan people. We swam and lazed on sandy and stony beaches on the Cretan and Libyan seas where Minoan ships once sailed on trading missions to nearby Africa, Asia and Europe. We even visited Christian churches now standing on the same grounds that once drew the Minoan people to celebrate the Goddess.

Our two and a half weeks on Crete were enlightening, at times awe-inspiring and, perhaps most of all, challenging for two 70+ year old women. Paula dislocated and broke her left shoulder on the first day of the Pilgrimage and continued on the tour anyway with her arm in a sling. I became both personal attendant and pilgrim. I climbed up rough paths to sacred mountain peaks and caves. Near the top of Mt. Juktas, the peak sanctuary of ritual importance to the ancient Minoan pilgrims of Knossos, I braved a wild wind that was so powerful and so erratic I had to deeply concentrate on every step I took to stay in control of where my foot would land. The trail we were following was a little too close to the mountain’s edge for my comfort in these conditions. At the Libyan Sea on the south coast of the island overwhelming waves knocked me off my feet repeatedly as I attempted and finally succeeded in moving from the shallows into deeper waters. 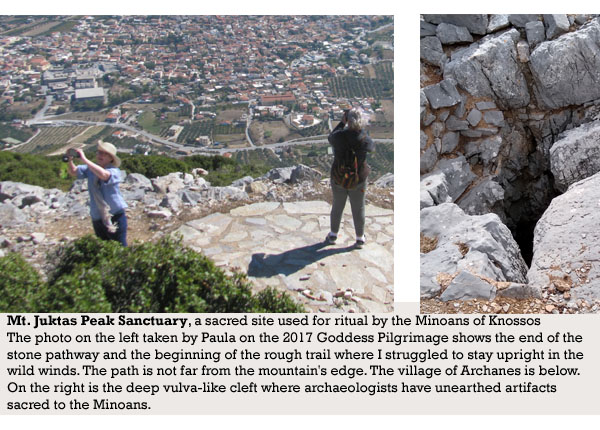 Despite all this, I’ve encountered what is perhaps my biggest challenge now that I am home again, here in the Ozarks.

I have left the mountains of Crete behind, almost certainly forever. Going on pilgrimage to Crete was the only time I have ever flown overseas and, for many reasons, I doubt I will ever fly anywhere again. Yet, the “Mountain Mother” song is staying with me, playing over and over again in my head. I am even singing it out loud to myself, despite the fact that I am one of those people who can’t ever stick to the tune.

The mountains here in the Ozarks are very different than the ones in Crete – not so high and ours are covered by an oak hickory forest. When we got home from Crete after over 24 hours of listening to jet engines and sitting in airports, I was immensely relieved to be back in ‘our’ verdant mountains, with all the familiar sights and sounds. I couldn’t help but hear and feel these Ozark mountains calling me: “Mountain Mother, I hear you calling me.” I had in no way left the Goddess of the Minoans behind me.

I couldn’t help but hear and feel these Ozark mountains calling me: “Mountain Mother, I hear you calling me.” I had in no way left the Goddess of the Minoans behind me.

Carol P. Christ, the now deceased author of the “Mountain Mother” lyrics and the founder of the Goddess Pilgrimage to Crete, wrote in the preface to her book, Rebirth of the Goddess:

“…the Goddess is the power of intelligent embodied love that is the ground of all being. The earth is the body of the Goddess.” (p. xv)

If the earth is the body of the Goddess – and I like thinking of both the Goddess and the Earth this way – then what does it mean to be promising, “Mountain Mother, we have come back to you.”? Is this just a spiritual commitment that entails embracing the Goddess or another Earth-connected spirituality? Or are we talking about material reality – coming back to the Earth herself – too?

The obvious answer to these questions from the perspective of any Earth-based spirituality is both. The very idea of a dichotomy (dualism) between spirit and nature originates in the patriarchal worldview of the Western world. As Carol Christ explained:

“…neither the history nor the contemporary meaning of the Goddess can be understood unless we develop holistic modes of thinking, abandoning the categorical distinctions between ‘God’, ‘man’, and ‘the world’ and transforming the classical dualisms of spirit and nature, mind and body, rational and irrational, male and female, that have structured the worldview we know as western thought.” (p. xiv, Rebirth of the Goddess)

According to C. Christ the spiritual understandings of a culture – its mythos or “culturally shared system of symbols and rituals that defines what is real and valuable” – are deeply connected to the way of life of that culture – its ethos. She explains:

“A mythos supports an ethos, telling us that certain ways of living and acting are appropriate because they put us in touch with what is real and valuable” (p. 160, Rebirth of the Goddess)

“Conversely, the living of an ethos reinforces the sense that the mythos to which it is connected is true” (p. 160, Rebirth of the Goddess)

When I sing “Mountain Mother, we have come back to you” I am embracing the symbols and rituals, feelings and understandings of a Goddess/Earth-centered spirituality, but at the same time I am reaching for an altered way of living that brings me and others back to the Earth, “Mountain Mother”, in very real physical ways. 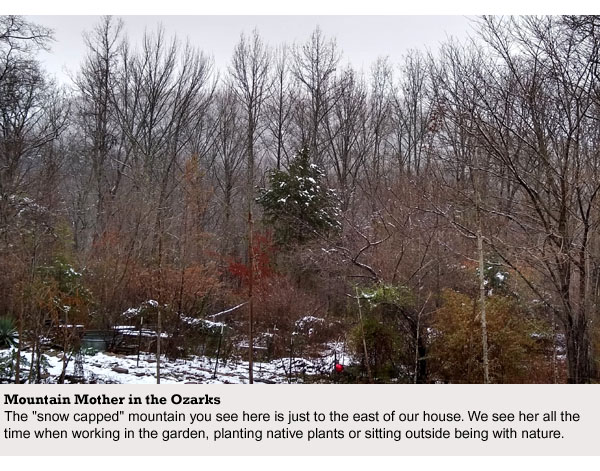 Here is that “biggest challenge” I mentioned earlier. I’ve spent most of a lifetime working to change my own ways of living and the way of life promoted and enforced by the capitalist, colonizing patriarchy that is dominating the Earth. Yet, can I truthfully say to Mountain Mother that I have come back to her? That I have already come back to her?

Paula and I watched one of the recent online Maternal Gift Economy salons and I was delighted when some of the speakers brought up the need to “exit the market” economy and live within the gift (and, I would say also, subsistence) economy. As things stand now in the dominant society, many, many people have been made dependent on the market economy for their basic physical needs. Corporate influences largely determine people’s “wants”, as well.

A key part of the needed transformation of society is to end the dependency on the market by returning to a gift (and subsistence) relationship with the Earth where our human gifts to the Earth would include great care for Her, great care of Her. If we want to come back to Mountain Mother, then receiving our sustenance directly from the gifts of the land and waters we live on is of primary importance, as is the physical care we give to the land and waters that are our home. Our own roots to the land can become deep like the trees living with us on Mountain Mother.

Of course, we don’t have to do all this alone. Other women (and men) are returning to Mountain Mother too and coming to live and work, at least in part, outside the market economy. We strengthen our women’s (and other) communities as each member uses the gifts from the Earth to create more gifts (e.g. making jam from native huckleberries) that then circulate within our communities.

A key part of the needed transformation of society is to end the dependency on the market by returning to a gift (and subsistence) relationship with the Earth where our human gifts to the Earth would include great care for Her, great care of Her.

I hope you aren’t finding talk of the gift/subsistence economy intimidating. Everyone on earth already participates in that economy! We are born into it and rely on it every day. When our mothers give birth to us, they are not paid to do this. Instead they are giving us the gift of life. When we cook dinner for friends or family members or they cook dinner for us we are participating in the gift/subsistence economy.

I will keep singing to Mountain Mother and telling her that “we have come back to you,” because we must come back to her and many of us are trying to come back. The tension I feel from singing what is not yet fully true for me, not yet true for many others keeps me motivated in the work I do for Earth and all of us, her diversity of creatures (including the human ones). The challenge of creating a way of life that is good for us and good for the Earth is one that I choose. What could be more satisfying (and fun) for any of us than getting to know Mountain Mother really well and dumping capitalist colonizing patriarchy at the same time we transform our lives and our communities!

1. The lyrics given here are adapted by me from two different versions, one on page 128 of Carol Christ’s book The Serpentine Path and the other from the song sheet handed out on the fall 2022 Goddess Pilgrimage.