by Paula Mariedaughter
When Amelia Earhart imagined “Tinkering: For Girls Only”, she planned a fully-equipped workshop for girls to “tinker to their hearts content”. She wrote about this shortly before her disappearance. These thoughts were published in the book Last Flight by Amelia Earhart, 1937.

Amelia wrote:
For a couple of years I had been pleasantly associated with Purdue University of Lafayette, Indiana, as a periodic and rather peripatetic faculty member. Purdue is a forward-looking institution building an important aviation department. It is one of the few universities in the world with its own landing field.

Additionally, it is co-educational. Of its 6,000 students approximately 1,000 are women. The problems and opportunities of these girls were quite as much my concern as aviation matters. Perhaps I have something of a chip on my shoulder when it comes to modern feminine education. Often youngsters are sadly miscast. I have known girls who should be tinkering with mechanical things instead of making dresses, and boys who would do better at cooking than engineering.

One of my favorite phobias is that girls, especially those whose tastes aren’t routine, often don’t get a fair break. The situation is not new. It has come down through the generations, an inheritance of age-old customs which produce the corollary that women are bred to timidity.

The mechanical-minded boy may have a field-day from the time his legs are long enough to toddle down to the corner garage. For all anyone cares, he may be weaned on piston rings and carburetors, and may remain beautifully grimy for indefinite periods. But with his sister it is different. With rare exceptions, the delights of finding out what makes a motor go, or batting the bumps out of a fender, are joys reserved for masculinity.

The girl who wants to do that sort of thing has such a hard time finding a place to do it that for long I have harbored a very special pet ambition. Among my other somewhat suppressed desires it is classified under the letter “T”. The imaginary file card reads, “Tinkering: For Girls Only.” The plan is to endow a catch-as-catch-can machine shop, where girls may tinker to their heart’s content with motors, lathes, jigsaws, gadgets, and diverse hickies of their own creation. Where they may sprawl on their back, peering up into the innards of engines, and likely as not get oil in their hair. Where they can make engines perk, clocks tick, radios yowl, and something of the everyday mechanical marvels which –given the chance—many of them would master quite as well as Brother Bill. And emerge somewhere in the scale between grease-moneys and inventors. Or, negatively, with at least their lack of aptitude revealed.
(Quote from page 25-26 of Final Flight)

According to HistoryNet, Earhart “kept a scrapbook of newspaper clippings that highlighted women entering occupations in motion-picture directing, law, advertising, management and automobile mechanics.” Earhart was the first woman to fly solo across the Atlantic Ocean, and was considered one of the most famous women in the world, yet she was fully aware of the limitations placed on girls and women. Once flying became her passion, it was her mother who helped her buy her first airplane. 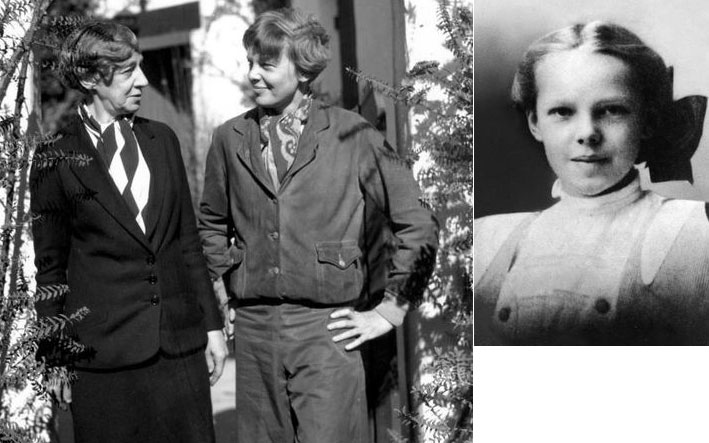 left photo: Amelia Earhart visiting her mother, Amy Otis Earhart, at home in Hollywood, Calif., on Jan. 14, 1935. Just days prior, the pioneering aviator had completed the first solo flight from Honolulu, Hawaii to Oakland, California; the 2,400-mile flight took her 18 hours, and she collected a reward of $10,000 for the feat…… Childhood portrait photo of Amelia

Her first flight instructor was Neta Hook in the early 1920s. Later, Earhart was instrumental in the formation of The Ninety-Nines, an organization for female pilots and was chosen its first president in 1930. As she wrote above, Earhart became a visiting faculty member at Purdue University as an advisor to aeronautical engineering and a career counselor to women students. Girls and women were a priority in her life. She was a member of the National Woman’s Party and an early supporter of the Equal Rights Amendment.

Yes, Amelia Earhart (born July 24, 1897; disappeared July 2, 1937) and her navigator were lost at sea after nearly completing their round the world trip. Her legacy as a woman who lived her life with zest and courage is not forgotten. She was truly “one-unto-herself” in my mind.

Amelia demonstrating the mechanics of flight to an interested girl. 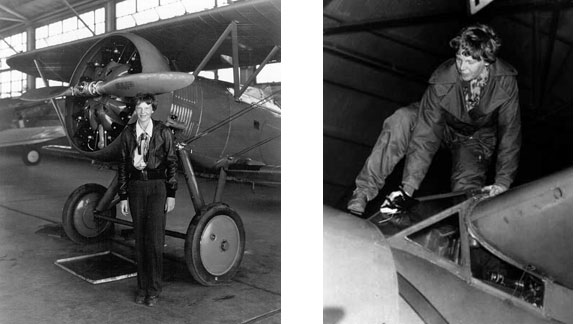 5 thoughts on “Amelia Earhart imagined this shop: “Tinkering: For Girls Only””