Creative actions by strong radical feminists always intrigues me! On the morning of January 29, 2019 feminist activists across the United Kingdom (Britain and Wales) and across Ireland had dressed various female statues with black t-shirts and a strong message. The t-shirts these uppity women used quoted from the dictionary: “Woman, noun, adult human female”. How simple, clear and direct.

Organizing such a coordinated action could not have been simple. Read what these determined women wrote about the action organized by ReSisters United. Here is the strong statement from the home page of their website https://resistersunited.org/
“ReSisters United was formed by women across the UK and Ireland, because we recognized the assault on our hard-won rights and freedoms that gender identity ideology could pose. Resisters United is therefore a feminist movement focused on women´s rights, centering women´s interests and experiences, and for this we make no apology.”

More than fifty cities and towns had this new chance to read the clear definition of who is a woman. Our gallery of photos was pulled from over 100 photos displayed on the ReSisters United website here: https://resistersunited.org/gallery/
One of my favorite photos showed a statue of Sappho wearing one of the ReSisters t-shirts. Sappho was a lyric poet from antiquity who wrote about love between women. Sappho lived in the Mediterranean including Lesbos during the sixth century BCE and was widely known. Her poems were performed to the accompaniment of the musical instrument called the lyre, thus she was a singer/songwriter of her day singing about love and desire between women. 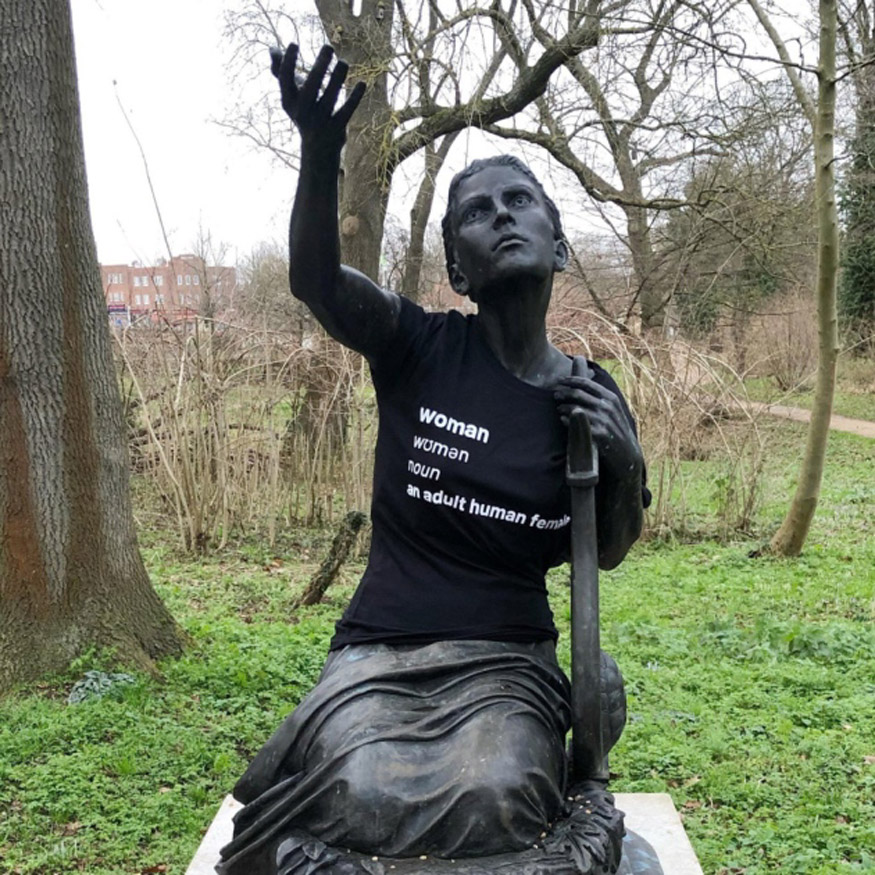 Sappho is a Right-On Woman, Still! Do you know the book I am referring to here? Sappho Was A Right-On Woman: A Liberated View Of Lesbianism by Sidney Abbott and Barbara Love published in 1972 was a treasure for many of us who came out as a woman-loving woman in the early 1970s!

message from Liverpool ReSisters https://twitter.com/LiverpoolReSis1
“The temporary addition of t-shirts and banners to notable female statues around the UK – such as Cilla Black in Liverpool – was a coordinated effort with women on a national scale. The simple definition of “woman: adult human female” on the t-shirts was to show how diluted this word has become in recent times and our concerns about the impact this has on every woman’s life. If “woman” is not clearly defined, law and policies cannot be written or enforced to best serve women. In September 2018, one representative of Liverpool ReSisters spoke to Liverpool City Council, asking for its mayor and councillors to consult women’s groups on retaining single-sex provisions in the city. This request was denied. The women of Liverpool and in many other places across England, Wales and Scotland will not allow ourselves to be silenced.

As ReSisters United, we take to the streets to create a dialogue among our citizenry. We use peaceful means of protest in order to encourage discussion and debate, so that women’s voices can be heard and our privacy, dignity and boundaries are maintained.”

Positive newspaper responses”
Members of a Herts feminist group have joined a UK-wide campaign to “reclaim the definition of women”, which involves dressing iconic female statues in T-shirts which have a dictionary definition of ‘woman’ on the front. from The Comet https://www.thecomet.net/news/letchworth-and-harpenden-statues-campaign-1-5870335

Negative newspapers:
from Wales Online:
T-shirts labelled ‘transphobic’ left hanging on statues across Wales
They have been spotted in Newport, Cardiff, Swansea and Pembrokeshire

Here’s why some trans people have said the ‘definition of a woman’ campaign is transphobic from Inews.co.uk

A group of anti-trans activists have been condemned for spreading “transphobia” in “a desperate grab for headlines” as they vandalised statues of feminist leaders with anti-trans slogans across the UK. The group, named ReSisters United, were spotted attaching t-shirts, bags and banners to feminist statues in Sheffield, London and Liverpool with the definition of the word “woman.” The items, which were draped across the likes of Cilla Black in Liverpool, Millicent Fawcett in London and Amy Johnson in Kent on Saturday featured the words ““Woman, noun. An adult human female.”

The group tweeted: “Overnight, women all over the UK came together, organised with one purpose – to define ourselves and our boundaries. Woman is not a feeling.” The vast majority of the signage has since been removed due to its offence to the transgender community. But why does the definition evoke offence, and how have members of the transgender community responded?

‘A desperate grab for headlines’ One transgender woman, who works as a developer and whose name is not disclosed said the action was part of “a desperate grab for headlines.” “This is from a group viscerally aware of the failure of their ‘movement’,” she said. “They’re doing this because it’s one of the only ways left for the cause to get publicity.” Trans woman Natacha Kennedy said that the t-shirts are a “coded threat” to the trans community. “By sticking to the dictionary definition, these transphobes can say, ‘but it’s only the dictionary definition!’, except we know it isn’t just that. Context matters and in my opinion, these t-shirts are being used as a symbol of hate. Trans women are adult human females,” she added. Because they do not use hate speech, a lot of passersby might dismiss what they are intended to mean, she argued. “For trans women it’s a coded threat, designed to sound innocuous to most people, but designed to make trans women, who routinely face abuse for not being ‘real’ (or even human) feel intimidated,” Ms Kennedy added.

One parent of a trans male teenager has said that the offence of the t-shirts is all about context. She likened the incident to one that plagued black footballer John Barnes during his career, which saw someone from the crowd throw a banana onto a pitch during a game at Everton in 1988 in an act of racism. “A lot of people will say it’s only a dictionary definition on a t-shirt, how can you get upset over a statement of fact?” she said. “But it’s like when you say if it’s only a banana, how can you get upset over a piece of fruit?” “Context matters,” she added.

As a woman proud to be a biological female, like the majority of the world, I’d like to add two more powerful images with clear messages!