by Paula Mariedaughter
The Trojan Horse is one of history’s most famous tricks. The Greeks were laying siege to the city of Troy, and the war had dragged on for ten years. The Greeks built a wooden horse, which they left outside the city. The Trojans believed the horse was a peace offering and dragged it inside their city. Later the Greek soldiers, hidden in the horse, killed the guards and opened the city gates to their army. The war was won with this clever trick. 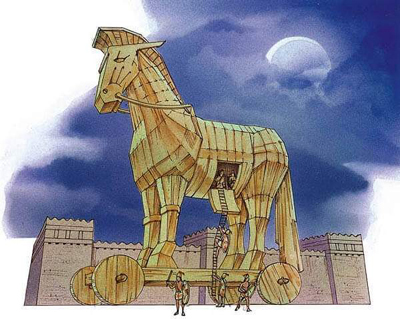 Browsing at my library, I found this book, Misogyny: The New Activism by Gail Ukockis (Oxford University Press 2019). Both curious and wary I brought it home. I was wise to be wary. Much of her anaysis of sexism is quite valuable. But, reader, beware! Read her words and note her strong bias, evident when she willingly refers to gender-critical feminists as TERFS!

“Trans issues were weird to me as a child, and it took me years to develop enough knowledge and sensitivity to become a trans advocate. Hopefully, my story proves that positive change is possible. Gloria Steinem also went through a similar change of heart regarding trans women. In 1977, she had publicly attacked Renee Richards as a ‘frightening instance of what feminism could lead to’ and “living proof that feminism isn’t necessary”. She asked, ‘If the shoe doesn’t fit, must we change the foot?’ She even praised the book Transsexual Empire: The Making of the She-Male in 1983. Today, though she is a strong advocate of trans rights. Some of my readers may be trans-exclusionary radical feminists (TERFS) who believe that trans women are not “real” women. However, I posit that it is a human rights issue for people to claim their own gender (or nongender) identity.” p.224

This is followed by three pages of glossary of “Terms and Issues” all from the trans-inclusive perspective! We know the trans ideology is ubiquitous! Young lesbians report having been involved in the queer/trans community and have put aside their own doubts and questions in the name of “inclusiveness.” Young lesbians are not encouraged to read earlier feminist writings and to then decide for themselves. (Note: Radical Feminism: A Documentary Reader, edited by Barbara A. Crow, would be a valuable place to start because it is comprised of pivotal documents written by U.S. radical feminists in the 1960s and 1970s.)

This author describes herself as an educator and a social worker. She has taught a course on Women’s Issues for over a decade and authored a textbook, Women’s Issues for a New Generation: A Social Work Perspective. Young people are continually exposed to the misogyny of instructors and texts that pretend that biological females are irrelevant in any definition of woman. She is educating with a strong anti-radical feminist bias! She dares to write a book about misogyny that will please the patriarchial institutions which published it and who will then use it to instruct young people. Let’s remember that her livelihood in academia depends on her endorsement of the trans ideology.

I see the acceptance of the trans ideology as a modern “Trojan horse”! One source explains that a “Trojan horse” is anything that looks innocent but, once accepted, has power to harm or destroy. In a similar vein, the Trojan horse effect is described as any disastrous result of an anticipated gain; or, the masking of a dangerous agent within an innocent garb. 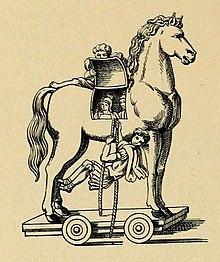 The “innocent garb” here is the pretense of inclusiveness. Women and Lesbians who value women’s spaces and organizations and festivals are denigrated, threatened and dismissed. Our thoughts and feelings are not considered worthy of “inclusion”. Perhaps with enough “knowledge and sensitivity” (as the book author said earlier about her conversion), the woman-hating of the trans ideology will become clear and that awareness will create the next generation of trans critical feminists.