Twelve old lesbians marching in the June 23, 2018 San Francisco Dyke March were verbally harassed and two of them physically assaulted by transgender rights supporters. Instead of supporting the lesbians being harassed, both the Dyke March and the National Center for Lesbian Rights are falsely claiming that the old lesbians were the ones acting in a threatening and violent manner. As I understand it, the dyke marches across the country have been largely taken over by persons who are not lesbians. How has this happened? 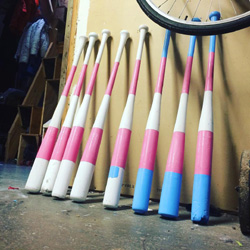 In her XX Amazons’ blog last week, Paula Mariedaughter described how “Lesbians [are] Not Welcome at a Women’s Center started by Lesbian Feminists.” That unnamed women’s center in Fayetteville, Arkansas is under the spell of lesbian trans supporters who have abandoned lesbian feminist politics in favor of the transgender politics of so-called “inclusion.”

So far, the board of directors there is all female and may be all lesbian. Some board members support women only space, but are unable to allow women only events due to the power of the trans supporting faction (and the fear of attack on the center by transactivists and their liberal, progressive, and “feminist” supporters). It looks to me like the Fayetteville center is in the early stages of losing its female and lesbian identity and sliding into trans domination. If they are successful in becoming increasingly “inclusive” it may just be a matter of time until lesbians who value women only space are purposefully excluded from the board and a male to transgender person is invited to join the board. Read Paula’s blog for more details of the situation there.

I believe this process of liberal lesbian trans supporters gaining increasing sway over a lesbian organization, adopting a policy and politics of “inclusion”, welcoming transgender persons into the organization, and, finally, welcoming male to transgender persons who claim to be lesbians onto the board of directors has become commonplace. Once this process has been completed, what was once a lesbian organization begins to put the interests of transactivists front and center. If the lesbian organization is considered a valuable enough target, powerful forces from outside the organization may become involved, perhaps training transactivists to infiltrate the organization’s board, providing advice on strategy, or supplying funding.** Some are calling this kind of trans takeover a “transjacking”. Whoops, there goes another piece of our once thriving lesbian culture!

Male to transgender persons are not only appropriating our identity as women, but are stealing our organizations.

Male to transgender persons are not only appropriating our identity as women, but are stealing our organizations. Many women and lesbians are doing our best to stop these thefts. Awareness of what is transpiring is a key part of our resistance.

We offer below links to several personal accounts by lesbians of what happened to them at the San Francisco Dyke March, the Women’s Liberation Front’s (WOLF’s) open letter to the National Center for Lesbian Rights, and a link to a Change.org petition from one of the women whose sign was torn up by the trans rights activists at the San Francisco Dyke March (see photo below).

WOLF’s open letter to the National Center for Lesbian Rights (NCLR) demands that the organization retract its slanderous and false allegations against the 12 lesbians who were harassed at the 2018 San Francisco Dyke March. In a classic reversal, “demonstrating a stunning degree of anti-lesbian bias”, NCLR falsely claimed that the lesbian marchers had “chanted transphobic slogans and violently harassed and threatened other marchers.”

See Max Dashu’s account of what happened at the San Francisco Dyke March. Max Dashu writes: “All of the old lesbians in our group were quickly surrounded, subjected to chants of “TERFs go home!” and blasted with hatefulness for the entire course of the march. Young queers berated, hounded, and crowded in on us. Most of them refused to speak with us, only glaring, chanting, and screaming.”

In “Young Women Attack Dykes their Grandma’s Age” Lavenderjoan writes: “It was a nightmare scenario. Imagine the Lavender Menace meets Lord of the Flies. Twenty-something participants in the Dyke March swooped down on our small contingent of old lesbians like crazed predators thirsty for blood…”

Here is Sherri Golden’s petition calling for The San Francisco Dyke March, the National Center for Lesbian Rights and the Bay Area Reporter to retract their “defamatory and libelous statements” claiming that the lesbian victims of threatening and violent behaviors by trans rights activists were instead the attackers. See Sherri Golden and what happened to the sign she carried saying “You can’t silence us with violence – Resist lesbian erasure” in the photo below. 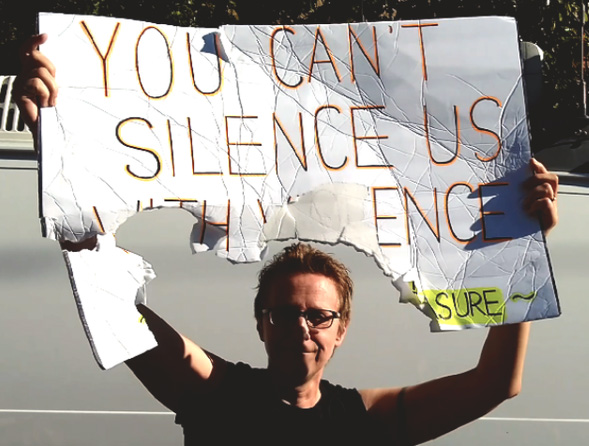 ** Sue Donym, Inauthentic Selves: The modern LGBTQ+ Movement Is Run By Philanthropic Astroturf And Based On Junk Science