Hello,
Thank you for making the effort to create this amazing event. I understand that you have been unexpectedly caught off guard by the political state currently transpiring in the LGBTQ and feminist communities. I am writing to you as a member of the witch/pagan community, a feminist, and a member of the LGBTQ community. I have been an active participant in each of these communities for about 25 years, since I was 15 years old. I came out as a witch slightly before I came out as bisexual, which was before I came out as a lesbian. I have always thought of myself as a feminist, but what I know, think, and feel about feminism is constantly changing and evolving.

Please consider that you have jumped to conclusions by blackballing Max Dashu. The argument against feminists is not as clear-cut as it may seem when you are only listening to one sensationalistic side of the story.

There are actually a lot of reasons why various people consider themselves to be radical feminists, or allies. And there is solid reasoning why this feels threatening to some trans activists. The primary issue of safety in this community is that the law requires a black and white categorization of the definition of male and female. Currently, at a legal level, sex has been completely conflated and replaced with gender. This is a win for trans activists who want trans women to get to go to women’s prisons, and play women sports, etc. However, the other side of the story is that this means that there are no longer any external indicators of who or what a woman is.

Currently, legally, anyone is a woman who says that they are. The result of this is that males are competing in women’s sports against females, and male rapists and murderers are occupying female prisons. From the standpoint of feminism this is a threat to women’s rights and safety. It is true that radical feminists want males to be excluded from women’s sports and women’s prisons. This is a complicated topic that still has years worth of work in progress needed. 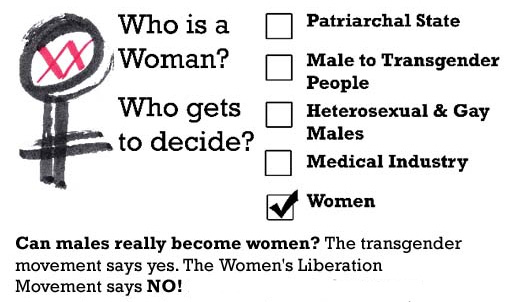 XX Amazons’ Who Is a Woman Brochure is available for download.

The perspective of feminists is that it is unsafe for men to be the ones who say what a woman is. Currently, legally, if a man gets convicted of a crime and doesn’t want to go to men’s prison, he can just say that he is a woman and he will get to go to women’s prison. There are documented examples of men being kind of bad at sports, not having the skills to compete at a men’s level, so joining women’s teams, claiming to be trans women. There are many documented cases of males in women’s prisons, and trans women committing acts of violence against women.

When you removed Max from your conference, you cited that you had not done your research or realized that she is a “terf”. TERF is an acronym for “trans exclusionary radical feminist.” The most common exclusionary act that supposed terfs commit is being lesbian. Lesbianism is considered an exclusionary sexuality. It is frequently said that having a sexual preference is thinly veiled transphobia, and sexual preferences actually do not exist. 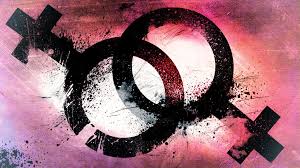 It is unfounded slander to consider somebody to be violent or hateful without any evidence to support that allegation. Lesbians and radical feminists are not performing acts of violence against trans women. Max has never done anything to harm or exclude any trans person from anything. Trans activists are commonly saying that it is the equivalent of actual violence to have the “exclusionary” sexual preference of lesbianism, or to hold the political ideology of radical feminism. Without intending to or realizing it, you have upheld this targeted attack against lesbian radical feminists. This is not ok. You’re being used as a tool to yield darkness and damage, against an extremely marginalized, extremely small community.

In very short order people are going to realize that terf is a misogynistic slur, it is the equivalent of the new McCarthyism.

I understand that you run an incredible risk if you choose to stand on Max’s side, because there are more and louder trans activists speaking up at this point in history. However, in very short order people are going to realize that terf is a misogynistic slur, it is the equivalent of the new McCarthyism. Any woman can be called a terf at any time for any reason, and if a woman is outed as a radical feminist she can lose her job, housing, and live with constant threats of actual physical violence.

Please do your research, and tread carefully as you move forward. I know you are a small organization, but please do not set the precedent of harming women by denying them a livelihood for being feminist lesbians. Please take this opportunity to support women’s basic human rights, rather than pandering to bullies who are threatening, committing, ignoring, denying, and excusing violence against women.

Thank you very much for your time,
Chelsea