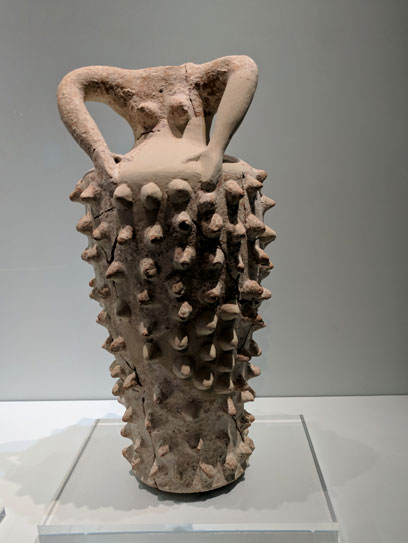 A multitude of breasts on this goddess figure from Crete was shaped by human hands over 3,000 years ago. Her head has been destroyed, but the respect for the nurturing powers of our female bodies remains for us to ponder. photo by Paula Mariedaughter, October, 2017 Heraklion Archeological Museum, Crete, Greece

Lesbians, feminists, and strong women have long been labeled as man haters. Loving women and supporting women has nothing to do with men. We who advocate for women and for women only groups are targets because we look toward each other for our primary bonds. This loyalty to girls and women is unacceptable to patriarchy and to those who support patriarchy. We understand from our own life experience that the bonding of girls and women is vital to our growing and thriving. We know our connections are essential for our survival.

Yet trans activists and their supporters label our words hate speech. Our groups are labeled hate groups because we advocate for women and for women only spaces like Michigan Women’s Music Festival. Women, like us, who will set boundaries denying men something they want – in this case calling themselves women – must be stopped from setting boundaries. We must be silenced and deplatformed by any means including intimidation and threats of violence. We are accused of being “transphobic” a term invented by trans activists to obscure the fact that we hold a vastly different view of sex and gender.

We are angry women! We are angry at the women who disregard our intense desire for women only space in favor of male to transgender persons who insist on claiming all the prerogatives of womanhood without the biological reality of breasts, ovaries, vaginas, and menstruation. We are angry at the extremist transgender activists who refuse the needs of girls and women to protect ourselves from predatory males.

We are informed women. We are women who want to look at the “big picture”. We have a clear point of view. Sex is a biological fact beginning with our gestation and exit from our mother’s body. Gender refers to the social stereotypes of interests, behaviors and clothing assigned to feminine and masculine, a strict binary system. For forty years we feminists have advocated abolishing these socially constructed, rigid roles.

We want to free males to take on “feminine” behaviors or females to act out “masculine” behaviors without resorting to extreme measures like invasive surgery or life-altering hormones. As lesbian blogger Parker Wolf declares, “Transgenderism is, at it’s very core, conformity. That is the number one goal of transgenderism: conforming to the binary. Butches and non-conforming dykes and lesbians want the very opposite.” *

As feminists we are willing to set boundaries. We are willing to say “no” to men. The “nice” women will let men do as they will. These women refuse to discriminate against any male who “feels like a woman”, and want to welcome them, as women, into women only spaces. Those women who welcome men into women only spaces hold radically different opinions and worldviews. We want to expose this divide and conquer technique as a tool of patriarchy. Our esteemed radical dyke thinker, Mary Daly, noted four “male methods of mystification” in Gyn Ecology (written in 1978, page 8) including: erasure, reversal, false polarization and the effort to divide and conquer. Daly then declares, “As we move further on the metapatriarchal journey, we find deeper and deeper layers of these demonic patterns embedded in the culture, implanted in our souls.”

We want to hold open discussions about all the issues here. Our views are valuable and necessary for a full understanding of how the transgender worldview is affecting the lives of children and young people. Silencing and discrediting anyone, whether parent, social worker, or medical professional, who questions the trans narrative is the norm for the trans activists.

The worldview of trans activists places trans oppression front and center rarely focusing on the oppression and safety of girls or the oppression of women as women. In my personal conversations with women who identify as trans supporters, that is, those who want to include male to transgender persons in women only space, I’ve heard comments about the extreme victimization of male to transgender persons given as a reason to accept these men as women. Then the small number of murders of transpeople is elevated in importance above the huge number of women murdered hourly. We do not want to be trapped by a false polarization of trans against rest of the world.

Loving women and supporting women is central to the life cycle of birth, death and regeneration. Patriarchy has the goal of destroying those bonds. One method used to accomplish this is to insert themselves into our sacred spaces. The reality of a women’s communities being divided about the inclusion of men-as-women in our events and our private spaces has divided us since the 1980s. This is a false polarization that could only exist in a patriarchy. Women only space is so powerful that the patriarchy and its allies must destroy our time together. As feminists we need to claim our anger at this injustice and seek solutions. When we set boundaries, we must be respected. Sometimes our anger protects us from despair–especially if it fuels creative solutions.

Biological women constitute the majority of people on the planet. We need to unite to end patriarchy and begin building our woman-centered, earth-honoring egalitarian matriarchies. Will you join us? You can join us as like-minded women or as male allies. Both are welcome. Your biological mother needs your support.

*Parker Wolf aka: BigBooButch, from “Lesbians, Dykes, and Butches: The Real Gender Non-Conformist” on BigBooButch.com, October 10, 2013

One thought on “Divide and Conquer”