Good news can be hard to come by in the U.S. fight against trans domination. But, it is time to celebrate! Radical feminists and gender critical allies just made a quantum leap forward!

On October 2, 2019 Feminists in Struggle (FIST) finished preparing and adopted their own feminist version of the U.S. Equality Act. The Equality Act (U.S. Senate Bill 788) currently in Congress enshrines transgender ideology and will take away critical women’s rights. This bill is supposed to be legislation to protect Lesbians, gay men, bisexuals, and transgender people from discrimination. The Equality Act was passed by the House on May 20th, 2019, but is unlikely, at this time, to pass the Senate (and would surely be vetoed by Trump). Nonetheless, the Equality Act is headed toward becoming law and, if passed in anything resembling its current form, will be a disaster for Lesbians, women and girls.

Over the past year I started seriously worrying about the Equality Act, but when I went to the Internet to try and find out what exactly the legislation included, I discovered that the Equality Act involves a rewriting of federal Civil Rights laws, including the Civil Rights Act of 1964. If your eyes just glazed over at mention of such complicated and important legal documents, you are following in my footsteps. I quickly realized that, not being a lawyer, coming to an understanding of the Equality Act on my own would be too large an undertaking. I didn’t even know how to go about finding a copy of the current bill! There was simply no way I had the time or enough motivation to overcome these obstacles. My worries about the Equality Act multiplied, but all I could do was wait and hope that other U.S. feminists would take the Equality Act on. And, thank the goddess for Feminists in Struggle and their legal team, we now have the “Proposed Model U.S. Equality Act Incorporating Feminist Amendments,” a detailed and truly feminist rewrite of the Equality Act (hereafter referred to as the FIST feminist Equality Act). 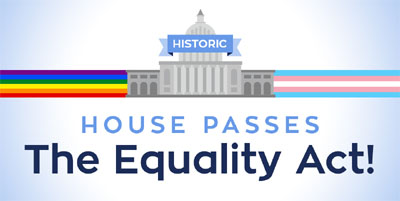 And what a rewrite! I found it to be a fascinating document, even with all the (necessary) legal language. Tina Minkowitz, a member of the FIST legal team, explains that one of FIST’s primary aims was to “articulate a feminist position that addresses challenges to women’s political existence and rights, as a result of gender identity ideology.” Despite all the discussions I’ve participated in about female erasure, I had not put it together before hearing Tina’s statement that our legal existence as women is at stake with the Equality Act. When the law ensures that gender identity trumps sex, transitioned males become women legally, and the legal category of women as biological females is disappeared. I was impressed at how the FIST authors were able to take essential ideas from radical feminist critiques of transideology, then hone those ideas down into simple premises that then became the bases of the FIST feminist Equality Act. 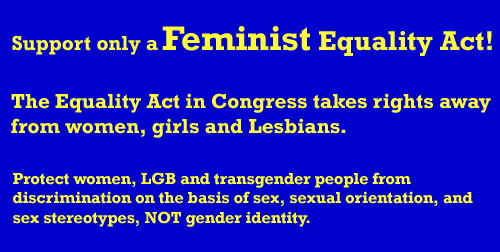 I couldn’t find images on Google that supported a feminist Equality Act, so I created a simple one. We’ll need many more of these!

FIST’s feminist Equality Act takes an entirely different approach that protects women, LGB, and transgender people by creating two new protected classes – sexual orientation and sex stereotypes. These are in addition to and separate from protections based on sex, allowing each of the three classes clear and uncomplicated protection. FIST eliminated all mention of gender identity from their document, but still addressed the legitimate claims of transgender people by providing protection from discrimination on the basis of sex stereotypes. By focusing on sex stereotypes, gender non-conforming people who are not transgender, including Lesbians and gay men, are also protected when they do not comply with sex role norms (demands).

The FIST feminist Equality Act includes the stated purpose of strengthening “sex-based rights for women and girls,” ensures that classification by sex remains legal and explicitly protects female only spaces. FIST explicitly states that the various laws being modified should not be construed “to prohibit places of public accommodation, schools, government entities or employers or other covered programs, services, establishments and activities, from establishing or utilizing female-only facilities, programs, or services such as transportation services, multi-stall toilets, locker rooms, changing rooms, communal showers, battered women’s shelters, refuges, homeless shelters, rape crisis centers, jail cells, bedrooms in residential facilities, hospital rooms, facilities providing intimate services such as massage or intimate grooming, or other places where women are sharing private facilities or are in states of undress and/or where their privacy may be compromised and.or their safety may be at risk from male-pattern violence against females.” (p. 17, FIST feminist Equality Act) FIST likewise explicitly protects female-only programs, services and activities that advance women’s status, development and well-being, including sports programs, scholarship programs, clubs, political programs and more.

When I heard that FIST was working on a feminist version of the Equality Act, my biggest hope was that they would find a way to eliminate all protections based on gender identity. I wanted transgender people to be safe from discrimination in hiring and housing practices and so on, but I was aware that existing laws protecting gender identity often gave M2T (male to transgender) persons access to women-only and girl-only spaces, such as school locker rooms. The concept of gender identity made it possible for a M2T person to claim, not just his identity as a transgender person, but the identity of a woman. If we want to go to the root of the problem (and that is what radical feminists usually strive to do), then invalidating and eliminating the concept of gender identity is our goal. I could go on and on about gender identity because it is such a serious problem, but I’ve moved most of those thoughts into a follow up to be published here soon. I celebrate FIST’s decision to keep gender identity out of their feminist Equality Act, while still protecting transgender people from discrimination on the basis of sex stereotypes.

FIST has done an outstanding piece of feminist work. Now it is our turn! Get involved with FIST to find out and support their strategies for advancing their Equality Act. We can also each unleash our own creativity in starting or getting involved with grassroots campaigns on every level, small and large. Even the simple graphic I created (above) is one small step toward an Equality Act that does what we need it to. (Feminist artists! Send copies of your feminist Equality Act graphics to XX Amazons and we’ll put them on display on this web site and make them available for grassroots campaigns. FIST may well be interested as well. XX Amazons can also display copies of your letters to the editor and other campaign materials that you’d like to make available.) The Equality Act is a federal law and that means that radical feminists and gender critical allies all over the U.S. can have a common goal of promoting FIST’s feminist Equality Act and sending the Senate’s (in)Equality Act straight to the trash bin.

View or download a slideshow presentation prepared by Tina Minkowitz that highlights key points about the “FIST Model Equality Act: Feminist Amendments to HR5/S788.” Available as a Powerpoint presentation or as PDF file.

Coming soon on XX Amazons! Watch for the blog on the “Feminist Amendments to the Equality Act” written by Tina Minkowitz, one of the members of the FIST legal team.

2 thoughts on “FIST Fights for Women With Equality Act Rewrite”