by Paula Mariedaughter
Lesbians Not Welcome at a Women’s Center started by Lesbian Feminists! How could this be? This local women’s center in Fayetteville, AR began three decades ago. It was funded, in part by a lesbian organization, the Lesbian Natural Resources.

Here is an excerpt from the Fayetteville public radio program describing the organization in an interview on June 3, 2015. The “intentional retirement village for elder lesbians and women in rural Madison County, conceptualized thirty years ago, is finally being established–but as a senior women’s community center in Fayetteville.”

Two years later, The Gayly newspaper on October 1, 2017 in an interview with the manager of that community center declared that the organization “has come to be an inclusive retreat for people of varying genders/orientations”.

However, lesbians and feminists who wish to have women only meetings or events are rejected based on our desire to experience women only groups. For over a year, many of us have tried to work with the board of directors. We are denied meeting space because we do not wish to include male to trans persons as women. We are considered noninclusive and our position is considered unacceptable. Therefore the board of directors continues to deny us women only meetings. The lesbians and women who support the claims of men to be women refuse to see our stance as a legitimate political disagreement.

In Female Erasure, edited by Ruth Barrett, she wrote, “Political disagreement is an opportunity for discourse that is part of a free society, and should be encouraged. When any questions or concerns are written off as hate speech, bigotry or ‘transphobia’, discourse cannot take place.” This is the situation we are facing as members of that un-named organization here in Fayetteville, Arkansas!

Early last February, several member women who want space for women only events spoke about our strong desire to use this facility to meet with like-minded women. We attended the organization’s annual meeting, but we entered a hostile environment that night. 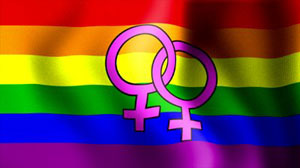 Proud to be women identified and women centered!

This is my statement to the board and the members at the annual meeting:

Discrimination as Boundaries
I am a lesbian. I came out in 1973. Choosing to be with women is the best decision I have ever made. Being a lesbian means I discriminate against men every day of my life. I do not wish my life to be dominated by the needs and desires of men.

For forty-five years I’ve lived as a dyke. I am a gender non-conforming woman! I am proud to call myself a Radical Lesbian Feminist. At times, I have been considered too “femme” by some of my dyke friends. At the same time, I have been considered too “butch” by the straight world. My desire is to live as my authentic self. I want this for everyone. Socially enforced “femininity” and “masculinity” are straight-jackets meant to restrict all of us.

I cannot accept the view that there are people born in the wrong body. The biological fact of being born female or being born male is based in physical reality. Discomfort with the roles assigned to each sex is a healthy rebellion to sex role stereotypes, otherwise known as “gender.” The world view of people pushing transgendering as a solution to the oppression of sex roles is a dangerous concept — especially for young people.

I understand that others have embraced another world view. I do not condemn those people. I am an advocate for peaceful coexistence. Women like me, who want to meet in women only space, must be respected. We will resist every effort to allow men to claim womanhood for themselves. Male domination is central to patriarchy. Men claiming to be women is stealing our birthright.

I want women like me to have equal access to the use of the space since we are members. I want young women to experience the reality of women supporting each other in women-only space. I welcome male allies to all open events. We all need for this women’s center to thrive as a unique community resource.

I have a right to set my boundaries. Yes, I am willing to discriminate against men. As I said earlier, I do not wish my life to be dominated by the needs and desires of men, especially the men who call themselves women.

I left that meeting depressed and numb. I walked alone, in the dark, to find our car parked a block away. I could not tolerate another moment in that threatening space.

In trying to comprehend how exactly this disregard of women’s and lesbians’ strong desire to meet together has become illegitimate, I found understanding in these words from Pelican Lee: “In response to the conservative backlash, segments of the left [including women, my addition] have shifted away from political and structural analysis of oppression and injustice, towards an individualistic politics whose primary demand is for recognition and validation of individual identities.” Full article: https://xxamazons.org/emperors-clothes-radical-feminist-view-gender-transgender/

Women and girls are victimized daily by men and by the male dominated institutions of patriarchy. By refusing to acknowledge this reality, many on the left and many liberal lesbians deny the oppression of women and name women and lesbians as oppressors when we refuse to accept the notion that men can be women if they so choose.

In reading and thinking and feeling about all these events and my own experiences, I’ve often encountered a disdain or dismissal of those of us who have lived as lesbians for decades and powered the lesbian feminist rebellion of the 1960s, 70s ad 80s. How did this happen?

Jocelyn Macdonald helped me see into today’s queer culture in her article, “Today’s Shameless Lesbians Won’t Be Queered”. Macdonald provided me with vital information about myself as one of those lesbians who will not even consider being “queered”!

She explained in that Feminist Current article that, “In queer circles, ‘lesbian’ is synonymous with second wave feminism. In a way, this is right on, as it was during the second wave that women fearlessly occupied what it meant to be woman-loving and many of radical feminism’s fiercest sisters are members of the “lavender menace.’ Queer women owe their rights to the radical resistance and separatism of their lesbian foremothers, but are embarrassed by lesbian culture and history.” Read the full article on Feminist Current here: https://www.feministcurrent.com/2017/01/13/todays-shameless-lesbians-wont-queered/

I’m going to close with a favorite photo sure to embarrass those young and middle-aged queer women who have turned their backs on lesbians like me who choose women, not men, as the center of our lives. To be embarrassed by us and to dismiss our radical feminist analysis of the oppression of women is directly related to their attitudes of ageism, misogyny, lesbian-hating and especially to their worship of pop culture! We are led to believe that, as old dykes with our unfashionable dress and generally uncool image, our determined loyalty to women and girls is outmoded. However, we are the dykes who can boldly testify to the rich connections we have built with other women in our woman-loving lives. Queer women have no idea what they are missing. Come join us! We need all the lesbian energy we can get! 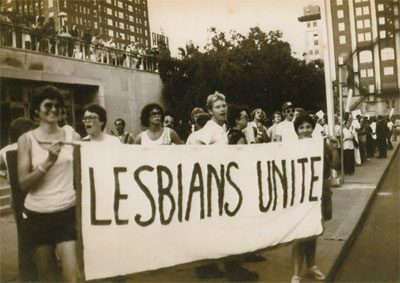 Paula (on left) and Martha carrying our Lesbians Unite sign at the Anita Bryant protest in downtown Kansas City MO, 1977.

4 thoughts on “Lesbians Not Welcome at a Women’s Center started by Lesbian Feminists!”