The struggle of gender critical feminists to stop the passage of the Equality Act – and amend the Equality Act – now moves to the U.S. Senate. Last Thursday the House of Representatives passed the U.S. Equality Act with a 224-226 vote. Three Republicans voted in favor of the bill. If ever there was a time for everyone concerned with the rights and well being of women to get engaged with the U.S. political system, this is it!

I’ll explain what is at the root of the problems with the Equality Act below and provide an introduction to the Feminist Amendments to the Equality Act developed by Feminists In Struggle (FIST) . But, first, here are two actions you can take right now!

XX Amazons has developed a flyer that can be used for outreach to women all over the country to alert them to what is happening in Congress right now. Please print out copies of the flyer (shown below) and put these flyers up anywhere you can think of. Even during the pandemic, women everywhere are still going to grocery stores! 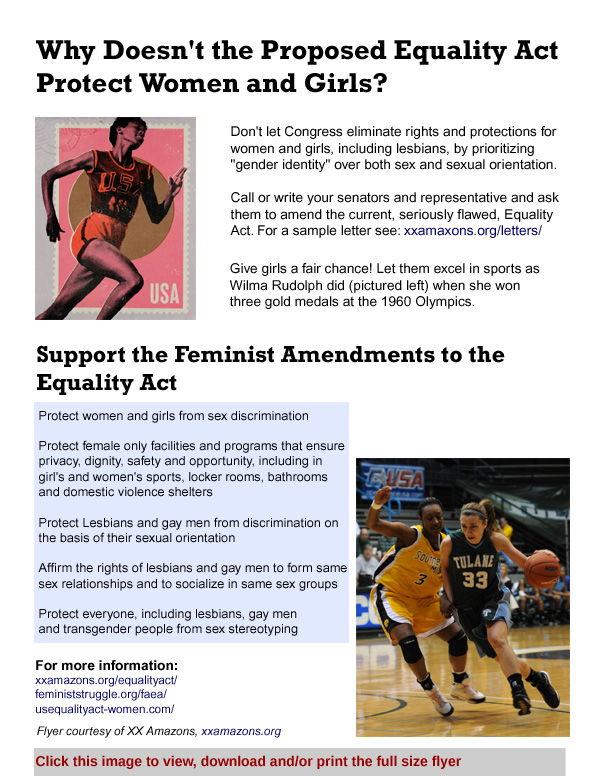 Spread the Word on Social Media

Here’s a graphic that you can copy and use in creating a Facebook or other social media post to spread the word even further. 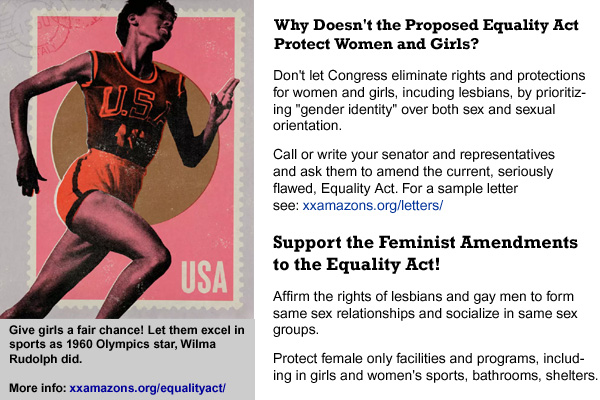 The Coalition for the Feminist Amendments (CoFA) has prepared a sample letter that you can personalize and email to your Senators. View and copy the sample letter here. Calling your Senators can be especially effective. You can find your Senators’ phone numbers and other contact information using a simple look-up form.

The Crux of the Problem with the Equality Act

The crux of the problem is that the Equality Act enshrines the concept of “gender identity” into U.S. law. Males base their claim that they are women on this concept which was invented by medical professionals in the 1950s and 1960s (Jeffreys) and latched onto by the transgender movement. Using “gender identity” males are able to say they “feel like” women and, with the Equality Act, the recent executive orders issued by Joe Biden and local legislation, PRESTO, their feelings are turned into what we are supposed to believe is reality.

Thus, the Equality Act makes it illegal to deny males who say they are women access to what have always been female only facilities. The Senate’s Equality Act explicitly states that there can be no female only private personal spaces: “[A]n individual shall not be denied access to a shared facility, including a restroom, a locker room, and a dressing room, that is in accordance with the individual’s gender identity.”

Giving any male who wants to the right to claim to be a woman has far reaching circumstances that goes far beyond his entry into female spaces, as is documented throughout the XX Amazons website.

Feminist Amendments to the Equality Act

FIST’s Feminist Amendments to the Equality Act protects women, LGB, and transgender people by cleverly creating two new protected classes – sexual orientation and sex stereotypes – while leaving existing protections for sex in place. Each of the three classes are given clear and uncomplicated protection. The Feminist Amendments eliminate all mention of gender identity, providing protection to transgender people on the basis of sex stereotypes. By focusing on sex stereotypes, gender non-conforming people who are not transgender, including Lesbians and gay men, are also protected when they do not comply with sex role norms (demands).

The Feminist Amendments explicitly protects female only spaces from intrusion by males claiming to be women including “multi-stall toilets, locker rooms, changing rooms, communal showers, battered women’s shelters, refuges, homeless shelters, rape crisis centers, jail cells, bedrooms in residential facilities, hospital rooms, facilities providing intimate services such as massage or intimate grooming, or other places where women are sharing private facilities or are in states of undress and/or where their privacy may be compromised and or their safety may be at risk from male-pattern violence against females.” (p. 17, Feminist Amendments Equality Act) Sports programs, scholarship programs, clubs, political programs are likewise protected.

For more information on the Feminist Amendments to the Equality Act, please see:
https://xxamazons.org/feminist-amendments-equality-act/