THE TRANSGENDER MOVEMENT appears to be very strong, but that strength largely comes from its outside support: big Pharma, the medical industry, extremely wealthy trans supporters, funding from philanthropic organizations, and run of the mill liberals who are not (yet) thinking beyond their concern with the prejudice and discrimination faced by transgender people. The transgender movement itself has a critical flaw – the refusal of the movement and its members to be satisfied with the transgender identity that they can legitimately claim.

Consequences for the Transgender Movement

A misdirected social movement. By taking a wrong turn from the path established by other minorities, the transgender movement has created strong opposition among many people who otherwise would have been allies. Almost anyone outside the right wing would support transgender people claiming a transgender identity. But, when transactivists insist that male to transgender (M2T) people have the right to usurp the identity that belongs to women, feminists who think through the implications for women, girls and lesbians become strong critics of this illegitimate claim. 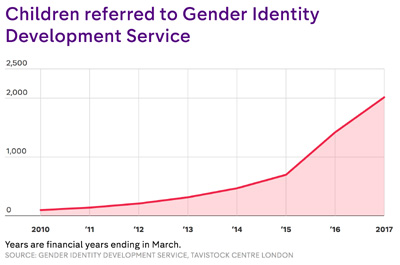 Referrals to children’s gender clinics have increased from very few in 2010 to around 2000 in 2017. Data shown are for the Tavistock clinic in London.

A great mix of gender critics have emerged, many concerned with the harm inflicted on children and adults by the practice of transitioning (i.e. claiming the identity of the “other” sex instead of claiming a transgender identity). Gender critics can include anyone from parents who don’t want their children subjected to hormone treatments, to concerned teachers, men opposed to patriarchy, detransitioners, and transgender people who don’t buy the party line. Gender critics find radical feminist understandings of sex roles and gender of great use. As GenderCriticalDad writes:

“I had to learn from feminism, it was the only discourse that made sense of a transcritical perspective, but also forced some hard questions about myself and how I live my life. Encounters with feminism on my journey as GenderCriticalDad have made me realize how deep sexism goes, how it leads me to be a misogynist sometimes and how this limits me. The Radical Feminism I found teaches me that I need to reject masculinity, not as a grand gesture to the world, but in life and actions with those I care about.”[1]

The transgender movement does not respond well to criticism. Transgender people with their “shaky” selves and easily hurt feelings (as discussed in Part One) require an unusual amount of social validation. Transgender ideology is shaky too because it is based in the defense of illegitimate claims and the need to protect the insecurities of transgender people. Transactivists are desperate to silence critics, prevent open discussion, and censor deviations from the party line. As a result, radical feminists and gender critics are the primary targets of the transgender movement, instead of the dominant society. Every other social movement has had great clarity about the need to fight its actual oppressors.

The Radical Feminist Threat: Get Rid of Gender! Radical feminists understand that gender is deadly for women and girls. Training in ‘masculinity’ creates male dominators; training in ‘femininity’ creates females who will submit to male domination. Without male dominators there could be no patriarchy, so patriarchy depends on gender for its existence. Gender does not just harm transgender people, but constricts everyone’s behavior. Gender is socially constructed; gender can, and must, be abolished.

The conflict with transideology is obvious. Radical feminists want to do away with gender while transgender people base their lives on the belief that their own gender preferences (and “gender identity”) are set in stone. They believe their only option is to change their sexed bodies to try to match their “gender identity”. Transgender people need gender to exist or “transgender” makes no sense at all. They need sex role stereotypes to provide the script for the act of appearing as the “other” sex.

Several years ago I ran across the “Spectrum of Spectrums” chart created by the trans-friendly Rhizome Consulting Project which depicted many forms of oppression, including colonialism, race, ethnicity, class, sexual orientation, age, religion and more.[2] The chart included “gender,” but this referred to the oppression of transgender (and intersex) people by “cisgender” people. I was stunned to find that sex oppression and male domination of women were nowhere to be found! 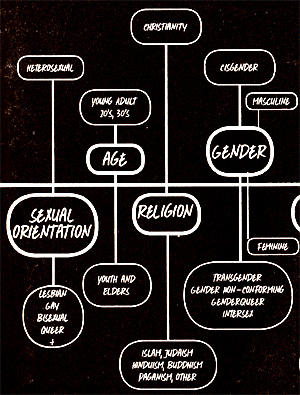 The Spectrum of Spectrums chart of many, many oppressions completely leaves out sex oppression. For gender, “cisgender” oppresses transgender. This is a small slice from the entire chart.

Who stands smack in the way? Radical feminists are not about to let go of our own understanding that women are oppressed on the basis of sex and that men (males trained in masculinity/domination) oppress women. Many radical feminists are not shy about saying that women are female and that transgender males can never be women. Is this threatening to transgender people? Off the charts!

Transgender movement attacks another minority group – women! The transgender movement is not the only misogynist social movement, but transactivists have taken misogyny to an extreme with its erasure of females, erasure of sex oppression, and attacks on its critics, many of whom are women and radical feminists. Transideology has taken and twisted words of power from feminism and the gay and lesbian movement and transactivists hurl accusations like “transphobe” and “transmisogynist” at its critics to silence them. 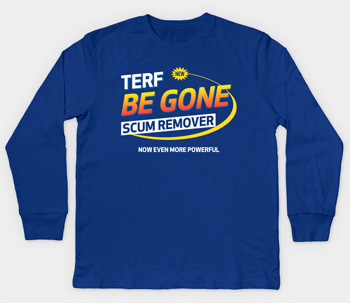 The transactivist’s invented word, “TERF” (i.e. Trans Exclusionary Radical Feminist) targets radical feminists. Slogans like “shoot a TERF today,” “kill all TERFs” and “I punch TERFs” appear all over the Internet, on t-shirts and in an exhibit at the San Francisco Public Library in 2018. Threatening language and behavior has spilled over into physical violence, as happened at Hyde Park in London on September 13, 2017 and at the 2018 San Francisco Dyke March.

Transactivists feel threatened by the most basic understandings of feminism and their response has been a desperate, vindictive attack. Sadly for those in the spell of transideology, radical feminism is the only system of thought that offers people troubled by sex roles and gender (everyone!) an understanding of the the roots of these problems and directs resistance at the actual enemy – patriarchal society.

Consequences for Girls, Women and Lesbians

We have here an odd case study. What happens to the targeted minority group – women – when another minority group lays claim to its identity? What happens when the intruders are, yes, a minority group – transgender – but also male (i.e. M2T) and therefore part of the dominating group in this patriarchal society? The consequences for girls, women and lesbians unfortunately could fill a book, but here is a partial overview: 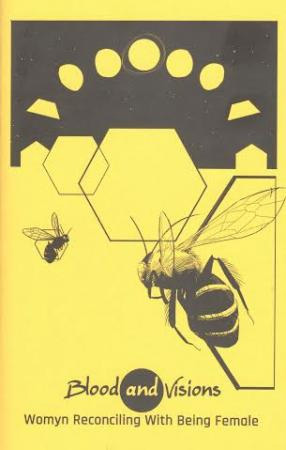 Blood and Visions contains the stories of detransitioners.

Anyone experiencing gender dysphoria could use coping techniques pioneered by detransitioners. Transgender people could stop performing an act and be free to be themselves, behaving in whatever “masculine,” “feminine,” or other ways come naturally to them.

The transgender movement would be able to turn its full attention to ending prejudice, discrimination and violence against gender non-conforming children and adults. Instead of viewing sex roles and gender as immutable, transgender people could join feminists in changing society so that no one is forced into “masculine” or “feminine” behaviors on the basis of their sex. The movement could follow the lead of gender critical transgender people, like Miranda Yardley, who reject transgender ideology as it exists today. Yardley sounds like a radical feminist:

“Here are some of the things that transgender ideology needs to do so that it may support the lives of women: …Accept that innate gender identity is based on ideas with such a tenuous link to observed science it is barely a conjecture. The transgender claim to womanhood (or manhood) is completely dependent on this concept of an innate gender identity, and taking this away strips the movement of its cloak of being a civil rights movement, championing the fight of an oppressed minority… [A]ccept that sex and gender are not the same thing. Sex is a biological reality based on reproductive potential, and gender is a social system that harms women through stereotyping behaviour, by giving women the negative stereotypes and men those that are positive; gender itself is oppression, not a civil liberty. All transwomen by definition are biologically male…”
(From “Transgender Ideology Does Not Support Women by Miranda Yardley”)

Transactivists could develop a new ideology based in an understanding that the dominant patriarchal society is the problem. The movement and many of its members (and supporters) would need to do some serious work dealing with their sexism and misogyny. The transgender movement would then be free to fight against its actual enemy instead of attacking radical feminists. When radical feminists criticize the transgender movement we are extending a hand to assist transgender people back on a time-tested path toward liberation. We could become powerful allies in the fight to end patriarchy and free everyone from sex roles and gender.

1. Quote from GenderCriticalDad is taken from “I’m not a hideously bigoted parent who doesn’t ‘get’ it’” in Transgender Children and Young People: Born in Your Own Body edited by Heather Brunskell-Evans and Michele Moore.